When I started the “Naturopaths are not Doctors” petition (below), it was on the heels of the annual naturopathic medicine lobbying event where naturopaths “storm” the U.S. Capitol to advocate for their alternative system of medicine. I thought my petition would be an easy way to voice opposition to their political agenda, which includes getting NDs licensed in all 50 states by 2025 and their inclusion in Medicare with a pilot program as soon as possible. My petition against naturopathic medicine was an experiment. It turned out I scared the crap out of naturopaths.

Five days after I launched the petition immediately above, the Executive Director of the American Association of Naturopathic Physicians, Ryan Cliche, sent an email to all members urging them to report my petition for breaking the law. I kid you not. He claimed that my petition contains libelous content and violates Change.org’s policies against impersonation and disrespecting the rights of others. Here is his email: 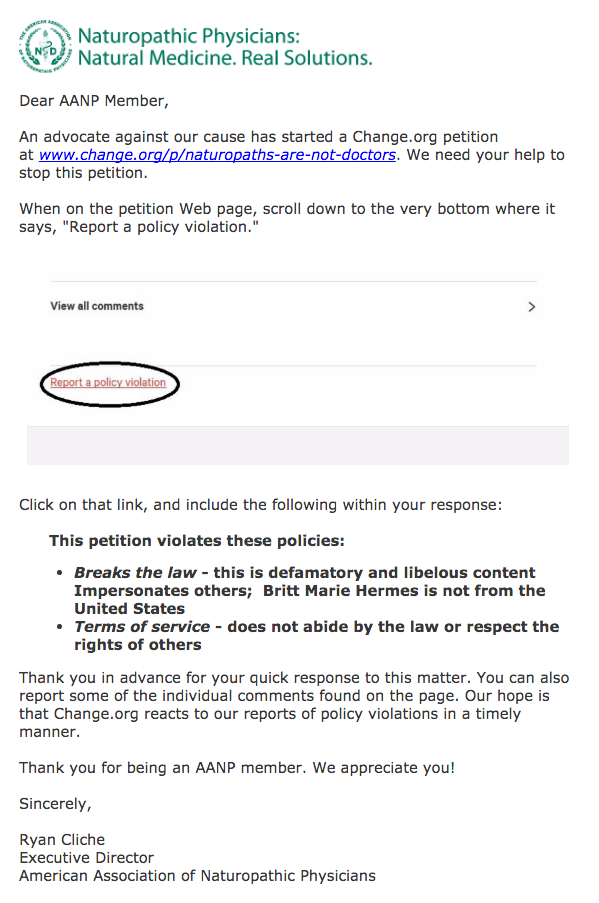 The American Associations of Naturopathic Physicians then started its own petition aimed at me because I allegedly “disregarded facts and evidence about naturopathic medicine.” According to them, “Blog or opinion pieces by advocate groups against naturopathic physicians are not credible references.”

Let’s get this straight. If someone does not support naturopathic medicine, then that person’s writing is not credible? That’s right, the AANP would rather accuse critics of libel than address and remedy the pitfalls of its profession that have been well-documented by those who took the time to investigate. Like me, these critics are motivated by the desire to protect patients from financial, physical, and emotional damage. We cringe at the thought of pseudoscience masquerading as medicine.

Dear Ryan Cliche and the AANP

You must have at least one lawyer on retainer who could have explained to you what defamation is and what it is not. You could have Googled it. Let me help. To commit libel, one must publish statements that are false, damaging, not supported by adequate research, and done so with the intent to cause harm.

What part of my petition contains false information? Perhaps you think it is the part where I say:

Naturopaths are not trained similar to physicians, nurse practitioners, or physician assistants. Naturopaths are trained in a hodgepodge of antiquated methods, mystical theories, and bare-bone fundamentals of medicine.

Or, maybe you think it is where I say:

Naturopathic students are required to master homeopathy, energy modalities, herbalism, chiropractic-like manipulations, and therapies involving heat and water. There is a strong emphasis on anti-vaccine promotion and alternative cancer treatments.

If you think “yes,” then perhaps you should read the 18 references I provide at the end of the petition. I chose these 18, since they provide facts about naturopathic education and practice that honestly contradict the promotional spin provided by naturopaths. It just so happens that you don’t like these references because they arrive at conclusions that should, in a reasonable person, elicit extreme misgivings at the thought of naturopathic doctors treating patients. My experiences training at Bastyr University and practicing for three years in Washington and Arizona support these grim assessments of the naturopathic profession.

Please show me multiple, independent sources of information that demonstrate that naturopathic doctors are trained just like physicians and are competent professionals in the practice of medicine. It will not be easy to overturn the overarching consensus that naturopathic medicine is quackery that puts the public in danger at the hands of severely under trained practitioners, who rampantly use homeopathy, shamelessly contribute to lower vaccination rates, and possess whimsical notions of human physiology and disease pathology.

To make matters worse, you probably also didn’t like it when, about two months ago, Carly Weeks reported in the Globe and Mail that about half of the licensed naturopaths in Toronto with an online presence were in violation of advertising regulations for making statements such as “naturopathic medicine can ‘act as primary treatment’ for cancer” or saying that thermography can detect early breast changes “before the growth of a tumour.”

You probably felt less than thrilled when Rebecca Robins wrote in Stat News that licensed naturopaths, “often derided as quacks,” use discredited therapies that include detoxes, mega-vitamin injections, and blood-type diets and exercises. Robins goes on to cite you, Mr. Cliche, saying that the AANP is “still discussing its stance on vaccinations.”

Let’s pause here. It is 2016. Yet, an aspiring medical organization is still trying to figure out whether to support vaccinations? This is undoubtedly because the entire population of NDs has been trained in anti-vaccination ways of thinking. I’ve shown it on my syllabi of pediatrics courses I took at Bastyr University. But I was not the first. These anti-vaccine ideologies in the naturopathic profession and subsequent effects have been well-documented by public health researchers and concerned physicians (which are cited in my petition). Why can’t naturopaths at least get on board with vaccines and, please, denounce homeopathy for the quackery that it is?

I know Change.org petitions can be annoying, and for causing annoyance, I apologize. That being said, the AANP is none too happy about the support my petition has gained in a short amount of time. Neither are other naturopaths. A “fact check” website was put up at brittmariehermesfactcheck.com, which, as you probably guessed, is less than compelling.

I hope that once you’ve checked the facts, you’ll want to sign my petition and share it with everyone you know. This could very well have real political effects by keeping medicine in the hands of those trained through a system based in science. We need more PAs, APRNs, DOs, and MDs to work in primary care medicine. We need fewer naturopaths.

Thus far, the greatest effect of my petition has been causing the AANP and other naturopaths to flail about in trying to exact an appropriate response. Kavin Senapathy nailed this account in her Forbes piece. If I were them, I would simply ignore me. Instead, naturopaths have lost control. We have yet to see naturopaths collectively behave in a way that defines a trustworthy and capable medical profession.

Let’s get more signatures and see what happens next!