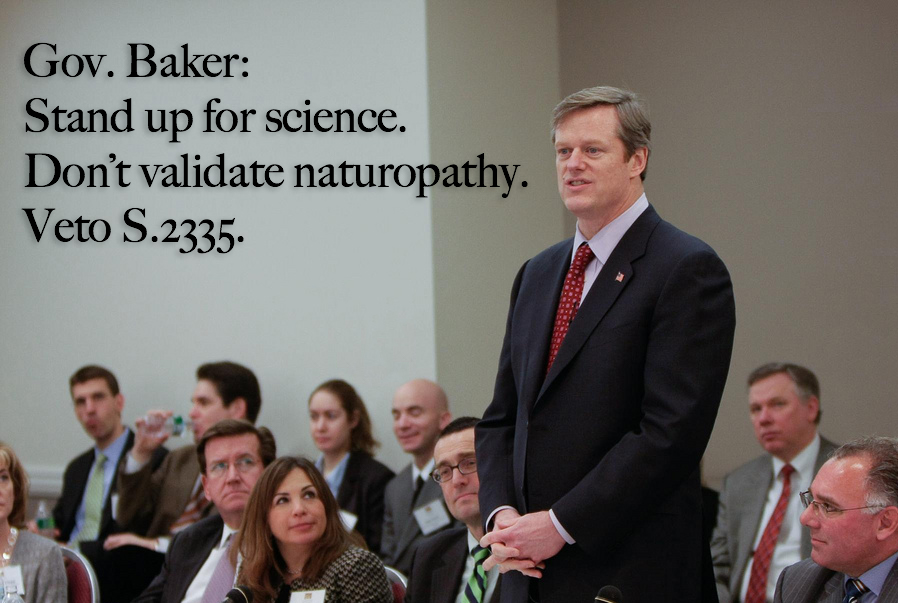 I learned late last week that the Massachusetts legislature passed the latest installment of the naturopathic licensing bill S.2335 in the final minutes of the 2016 legislative session. The bill is currently sitting on Governor Charlie Baker’s desk. He has a few days to sign the bill, which would make Massachusetts the 19th state to license naturopaths. If he does nothing, S.2335 will die from a pocket veto.

Senate bill 2335 is asking a lot. It allows naturopaths in Massachusetts to call themselves “doctor,” diagnose disease, order lab work, treat patients of any age, and essentially work as a physician. I encourage readers, and lawmakers, to check out Jann Bellamy’s post detailing S.2335 at the Science-Based Medicine website.

Naturopaths are not qualified to manage any kind of medical care. As a former licensed naturopathic doctor myself, I have seen first-hand how licensing naturopaths to act as doctors results in harm and needless expenses.

I practiced naturopathy for three years. I witnessed harm inflicted on patients in every naturopathic clinic where I worked. In all cases, the naturopaths at fault were practicing just as they had been trained to do. But the treatments were ineffective and costly at best; at worst, they were deadly.

In 2014, I worked for a naturopath who treated cancer patients. I assisted this naturopath with his treatments of intravenous herbal medicines and highly concentrated vitamins, water fasts, and a non-FDA approved chemotherapeutic drug that was illegally imported from overseas called Ukrain. He charged patients thousands of dollars for these injections. The FDA had denied approval of Ukrain for any medical condition due to concerns of quality assurance and safety. The inventor of this drug is currently serving jail time for committing commercial fraud.

Upon discovering that my boss was engaged in illegal activity, I quit and reported his actions to the Arizona naturopathic regulatory board. The board completed a cursory investigation, which resulted in my former boss receiving a letter of reprimand. It seemed to make no difference that patients lost thousands of dollars on bogus medical care. It also did not seem to matter that many of these patients were diagnosed with late-stage or terminal disease. Several of them died in the midst of receiving injections. This naturopath continues to treat cancer patients in Arizona. In fact, he holds the title Fellow of the American Board of Naturopathic Oncology. In the eyes of the naturopathic profession, he represents the best of what naturopathic medicine can offer to cancer patients.

Cancer is a home-hitting topic for naturopath Amy Rothenberg who is leading the Massachusetts licensing effort. She was diagnosed with breast cancer in 2014 and speaks freely about actively pursing medical therapies including surgery, chemotherapy, and radiation alongside naturopathic therapies like herbs, vitamin injections, and oxygen gas delivered in a closed, pressurized chamber. Naturopaths frequently claim, and I learned in school, that naturopathic therapies delivered in conjunction with medical care help chemotherapy work better and prevent cancer from reoccurring.

After finishing her breast cancer treatments, Rothenberg elected to have her ovaries removed when genetic testing revealed she was a carrier for a genetic mutation that increases the risk of both breast and ovarian cancers. Early stage cancer was then found in her ovaries, and she needed to undergo treatment once again.

Rothenberg fails to mention that none of the alternative cancer treatments she pursued have been proven to work or to be safe. The vast majority of medical oncologists do not provide these treatments. Alternative therapies are also very expensive and not covered by insurance. One patient at my former practice accumulated close to $50,000 in credit card debt paying for alternative cancer therapies just like the ones Rothenberg used. This patient died while still receiving naturopathic care.

Alternative cancer therapies are largely considered to be medical fraud, just like Rothenberg’s specialty in homeopathy. She and her husband are the founders of the New England School of Homeopathy and a “research center” called Herscu Laboratory, which claims to support homeopathic research.

Homeopathy is an archaic practice of medicine using infinitesimal amounts of substances diluted in water to the point where no original material remains. The therapy has been debunked and is widely considered by medical experts to be bogus. The U.S. government agrees. The Federal Trade Commission is now requiring homeopathic products to state that there is no scientific evidence backing homeopathic health claims. As health policy researcher Timothy Caulfield states, “To be believe homeopathy works…is to believe in magic.”

Rothenberg is a believer. At a major FDA hearing on homeopathy, Rothenberg argued against rigorously evaluating homeopathy for safety and efficacy, even though her husband runs a research facility dedicated to studying it. She admitted that she treats half her patients exclusively with homeopathy, while they receive effective care by medical doctors in conjunction. I believe her patients are being swindled. There is no doubt that this champion of S.2335 is driving up health care costs for Massachusetts’s residents.

Governor Baker, I know naturopaths are nice people. I know their sound bites are appealing. I know that on the surface naturopathy sounds wholesome and safe. I know these things because I used to lobby for naturopathy, and I was good at it.

Based on my experiences from both sides of the issue, I’ve provided a quick deconstruction of the six naturopathic talking points being used to promote licensing legislation in Massachusetts:

1. Naturopathic doctors are general practitioners who are medical specialists in natural therapies

Naturopaths are not trained as general practitioners or primary care physicians. They receive less training in pharmacology and drug management than nurse practitioners and physician assistants. Naturopaths complete several hundred hours in training at an alternative medicine clinic, while physicians receive tens of thousand of hours of clinical training in hospitals and medical facilities.

3. Naturopathic doctors are well-respected members of the health care community

Naturopaths are fringe alternative practitioners vying to get their foot in the door. Their livelihood depends on licensing because it provides them with state-sponsored legitimacy, which leads to mandated insurance reimbursement of naturopathic services. Naturopathic doctors are widely considered to be charlatans, quacks, and witch doctors. They are willing to bend the truth in order to make political gains.

4. Naturopathic doctors have demonstrated an excellent record of safety

Naturopaths also cite medical liability insurance carrier data as sources of safety records. As far as I can tell, this data does not exist. But I do know that most insurance companies that cover naturopaths cater exclusively to alternative medicine providers, which would make it difficult to compare their data with medical malpractice insurance providers.

Naturopaths are not licensed in 32 states. It is illegal to practice naturopathy in two states: South Carolina and Tennessee.

6. Naturopathic doctors are seen as vital contributors of science-based expertise in the field of natural medicine

Naturopaths are widely regarded as science-denying swindlers. (And here.) They regularly dismiss high-quality vaccine research of safety and efficacy. Naturopaths fan the flames of anti-vaccine thinking. Amy Rothenberg recently presented at a conference for the National Vaccine Information Center, an anti-vaccine organization, that encourages parents to distrust the government’s recommendations for childhood vaccines and perpetuates conspiracy theories such as, “government health officials in federal health agencies have withheld information about vaccine risks from the public.”

Editor’s note: This post was updated on January 10th, 2017 to include additional information.

Image credit: 1) Rappaport Center, some rights reserved. Changes were made.