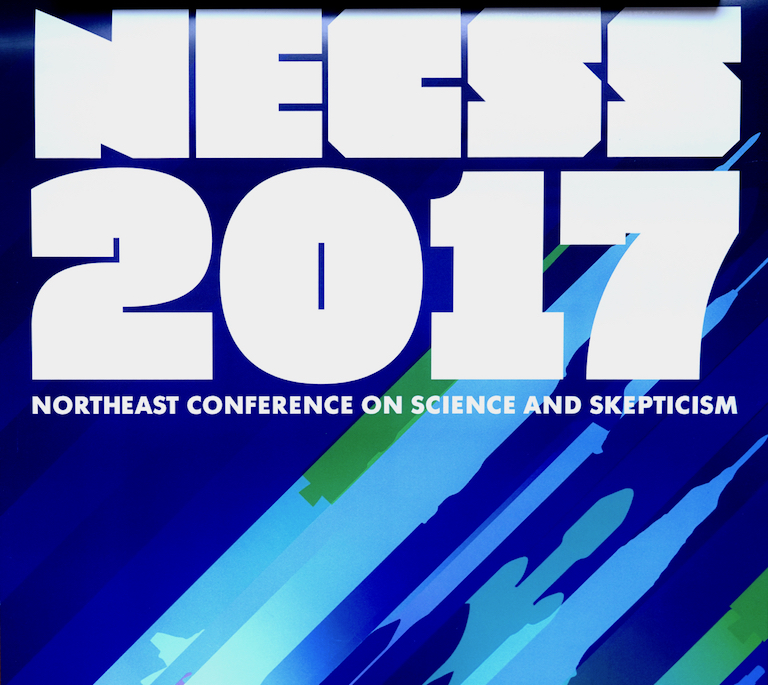 I spent last weekend in New York City at the 2017 Northeast Conference on Science and Skepticism. I was honored to speak on the day of Science-Based Medicine with some of those who aided my coming out against naturopathy in 2015. In my talk, I detailed how I fell for naturopathy and why I left to a warm audience of skeptics and critical thinkers. I had a great time meeting so many wonderful people and having great conversations. I want to give a big thanks to the NECSS staff, who put on a fantastically rewarding conference despite a last minute venue change due to a fire in the basement of the meeting space days before the show began!

A wonderful finale! Thanks to all the staff for their hard work! #NECSS #NECSS2017 pic.twitter.com/dI6ucQq0a2

I want to recap some points from my talk for those interested. When the NECSS team posts a video, I’ll be sure to share the link. I offered a warning to the audience: The naturopaths are coming! They are boldly pushing forward with fake medicine and benefit from decades of misinformation campaigns and a surging wave of pseudoscience that’s hitting society with detoxes, fad diets, health gimmicks, and medical scams. In fact, at the same time as NECSS, an international group of naturopaths met in London to exchange ideas ranging from intravenous baking soda for cancer and other alternative medicine notions like “liver stagnation” and “detoxification.” Naturopaths try to seem legitimate, despite their nonsense.

How naturopaths get what they want

Naturopaths want to be licensed in all 50 U.S. states by 2025 with a scope of practice similar to that of medical doctors. This goal is ambitious, but it is not impossible. The very fact that naturopaths are licensed anywhere as “doctors” or “physicians” highlights how branding pseudoscience can lead to state-sponsored quackery. Let’s take a look at how this is playing out in North Carolina and New York.

North Carolina and the ‘Foot-in-the-door’ Approach

Naturopaths have been trying to get licensed in North Carolina for eight consecutive legislative sessions. But it seems naturopaths are consistently facing roadblocks getting bills passed that would give them a version of a medical license with self-regulation. Now, naturopaths are trying a new strategy to get what they want by using the “foot-in-the-door” approach.

This year with Senate Bill 258 and House Bill 692, instead of asking for licensing, naturopaths are asking for certification. The term certification appears to be palatable. But if you are not paying close attention to the wording of the bill, you may miss that certification is essentially the same as licensing. If passed, the bills would allow naturopaths to practice their brand of fake medicine. Once they get certified in the state, naturopaths will come back every legislative session to ask for more privileges—something they’ve done in many states.

Certification will give naturopaths a scope of practice that will make them dangerous. They will be able to diagnose and treat disease, recommend and sell supplements directly to patients, order diagnostic tests, and administer substances rectally, orally, and vaginally. There is no mention of parenteral (i.e., intravenous) administration in the bills. But from a licensed (or certified/registered) naturopath’s perspective, items not specifically excluded in the law create a “grey zone” into which naturopaths gladly venture.

Operating in a legal grey zone usually works for naturopaths. There tends to be little to no repercussions for naturopaths who operate outside their explicitly defined scope of practice, since licensed naturopaths regulate and thus protect themselves from practices that if performed by a medical doctor, would end in malpractice hearings and revoking of his/her license. Indeed, the naturopathic certification bills in North Carolina would allow naturopaths to establish a Naturopathic Doctor’s Certification Board that would be staffed primarily by naturopaths. It’s hard to imagine that this board would, or could, provide any apprioriate oversight. The certification bills further fail to establish a standard of care, nor do they require naturopaths to obtain malpractice insurance or prohibit naturopaths from marketing their services using false or exaggerated claims. Since “naturopathic doctors” are not trained in medicine, there is no way for these hypothetical future board members to judge which naturopathic practices are below a benchmark of high-quality, safe care that is supported by scientific evidence.

Any naturopathic regulatory board has an incentive to ensure that naturopaths publicly appear to be well-qualified, safe practitioners rather than go after the quackery that defines their profession. It seems to be about bolstering the public image of its members and protecting their scope of practice from critics, especially when naturopaths are trying to push through legislation.

Case in point: the naturopathic regulatory committee in California failed to investigate 34 complaints against licensed “naturopathic doctors” for practicing intravenous ozone therapy, which may have prevented the death of Jade Erick. She died from an intravenous injection of a turmeric solution (likely curcumin) that was given by an ND who was also doing ozone therapy in practice. California naturopaths have been desperately trying to expand their scope of practice. Although there is an “accredited naturopathic school” in San Diego, naturopaths in the state have a relatively limited scope of practice. This is bad for business. How can you convince students that they are being trained as primary care doctors in a state where naturopaths can only legally perform a handful of tasks central to the practice of medicine? This is to say nothing of the fact that naturopaths are unequivocally not trained as doctors. They aren’t even trained as well as nurse practitioners or physician assistants. But the fact that “naturopathic doctors” are under-trained hardly seems to matter in an era where facts carry less weight than spin.

New York and fundraising to lobby for pseudoscience

New York naturopaths certainly know the power of a good story. They have been trying to get licensed in New York for ten years and have equated their efforts to David and Goliath. As you may have guessed, the American Medical Association is Goliath. Medical doctors are the enemy. Naturopaths are pulling out all the stops to raise cash to support their lobbying.

The company Emerson Ecologics put ten grand towards a licensing campaign in Michigan last year. According to the naturopathic state organization, this money helped get a licensing bill passed by an important House committee. Fortunately, the bill ultimately failed and naturopaths remain unlicensed in Michigan. But perhaps legislators in the state have now been primed, which could make it easier for naturopaths there to get farther in the next legislative session.

Donations from supplement companies also fund national campaigns. In 2016, the American Association of Naturopathic Physicians received over a quarter of a million dollars in donations, mainly from companies selling a wide range of dubious products, from homeopathy to herbal extracts for intravenous injection. The money was used to hire two marketing experts to improve the public image of the profession through grassroots and media campaigns.

Even with these donations, though, naturopathic organizations resort to relying on the financial support of their patients to fund political work. The New York Association of Naturopathic Physicians has set-up a Go Fund Me page and is asking for $45,000 to help get their licensing bill passed. The group promises to “get the right information to key legislators and influencers.” They are looking at naturopaths in Massachusetts and Pennsylvania where licensing and registration bills were recently signed into law. They are hoping these political wins will lend significant momentum to get a similar bill passed in New York.

The naturopaths are already here

These are just two examples of the political inner workings of naturopaths. The reality is that naturopaths are politically galvanized across the United States. They undoubtedly benefit from an erosion of scientific literacy and lack of critical thinking sweeping the nation.

But, there is no doubt that the naturopathic profession is facing a financial crisis. My guess is that massive student loan debt has forced naturopaths to boost their lobbying efforts. Remember, naturopathic schools costs the same as medical school—about $40,000 per year for four years. Graduates from naturopathic schools cannot financially survive unless they are legally permitted to practice and hook returning patients. A great way to make money as a naturopath, often without even knowing it, is to sell health scams. Naturopaths cannot sell health scams unless they can regulate themselves. There is a massive financial incentive to keep fighting for favorable legislation.

The naturopaths are already here. But we can stop them. [inlinetweet prefix=”” tweeter=”null” suffix=”via @NaturoDiaries”]The licensing of these fake doctors does not have to be inevitable.[/inlinetweet] In states where naturopaths are already licensed, we need to encourage lawmakers to place strict limits on naturopathic practice. We may even get lawmakers to scale things back farther in the interest of protecting children, for example, or de-license naturopaths entirely, like what happened in Idaho in 2015.

In order to be successful, we need to be persistent. We need to make our skeptical voices heard.

I am asking all of you to pay attention to naturopathic legislation in your states. Efforts are underway to make this easy. The Society for Science-Based Medicine posts legislative updates on naturopathy bills in the United States. There, you can find direct links to the text of the bills and a detailed history of them. I’ve used this information to curate a legislative guide here on Naturopathic Diaries. Here, you can find detailed information about naturopathy in any U.S. state or Canadian province. Compiled information includes:

On the legislative guide home page, you’ll find the 2017 Fact Sheet on Naturopathy that you can download and print to give to journalists, lawmakers, or anyone else interested in knowing more about naturopathy.

Our voices do make a difference. I know this sounds idealistic. But consider this:

I used to be one of naturopathy’s biggest cheerleaders. I loved naturopathy. I loved my job. I would have gone to great lengths to help the naturopathic profession, which loved me back. That all changed. Now, I am naturopathy’s public enemy number one, just for speaking the truth.

I could not have made a public change from quackery to science without the support of the skeptical community. Thank you for accepting me with open arms. This is really saying something amazing about all of you.

I did lots of unacceptable things as a make-believe doctor. I prescribed homeopathy and bogus detox packages. I delayed vaccines. I called myself a physician. Medically, I didn’t know what I didn’t know. If you all can accept me, a former quack, as one of your own, then I believe this group of individuals can do anything.

Now let’s get to work.

“If you all can accept me, a former quack, than this community can do anything." – @NaturoDiaries #NECSS #skepticism pic.twitter.com/VZofphX0Gc