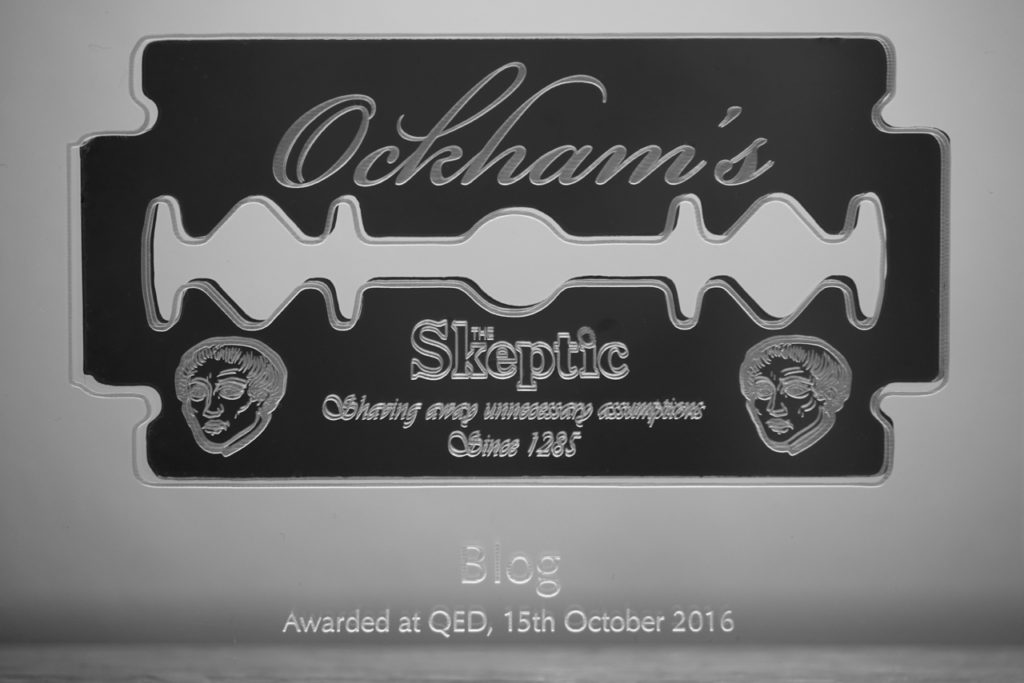 I attended my first QED this past weekend in Manchester, England. Question, Explore, Discover is an annual science and skepticism conference, and this year’s QED was the largest in its six-year history. I had a great time and highly recommend that readers attend next year.

I gave a talk on the main stage titled The Right Detox: how to detox an entire belief system in five easy steps. I described how I fell into and then out of being a naturopathic “doctor.” (I hope to be able to link to a video of it in the future.)

Here are some reactions and live tweets from the audience:

@NaturoDiaries: "naturopaths are not doctors". Practicing #naturopathy was unethical". "I was a fraud" #QEDcon pic.twitter.com/mmSHfV9xOW

Britt Hermes (@NaturoDiaries) on her naturopath training at Bastyr and her retreat from the field, inspired in part by @EdzardErnst #QEDcon pic.twitter.com/Unzx3183BG

This has been one of the best #QEDcon talks I've ever been at. Incredible story, incredible talk from @NaturoDiaries.

Not sure I've seen a standing ovation at #QEDCon before.

Such a moving and inspiring talk from @NaturoDiaries.

*wipes away a little tear*

Thank you, everyone! It felt so great to have such positive feedback.

Later that evening, I was touched to be given an Ockham Award for Best Blog, hosted by The Skeptic magazine. Thank you to Caroline Watt, who presented the award.

So proud of Prism alum @NaturoDiaries for winning the Okkham Award for best blog!! pic.twitter.com/js2kIaFjyq

Other Ockham winners were The Good Thinking Society for Best Campaign; Dr. Suzi Gage’s Say Why to Drugs for Best Podcast; and Crispian Jago, who was awarded the Editor’s Choice Ockham. Congratulations!

This was a day that I will never forget.

Writing about my time as a naturopathic doctor has brought difficult moments. I lost friends and gained enemies. I have been accused of defamation by the American Association of Naturopathic Physicians and its surrogates.

There were times when I wanted to quit. I had several existential crises. I argued with myself that slipping into obscurity may be a better choice, where I could forget my past life as a quack doctor.

My experience at QED reminded me why “Big Naturopathy” needs to be challenged. Patients deserve to know the dangers associated with getting medical care from under-trained practitioners steeped in pseudoscience. Lawmakers need to know that “ND” does not convey medical competency. Rather, it indicates that a person using that title is unequivocally “Not a Doctor.” Allowing naturopaths to become licensed and self-regulated endangers the public good.

I lost my former community after I came out as a whistle-blower, but I’ve gained an international support system of skeptics, scientists, physicians, and friends. [inlinetweet prefix=”@NaturoDiaries:” tweeter=”” suffix=””]I am standing on the shoulders of skeptical giants.[/inlinetweet]

Thank you! And, an extra big thank you to the organizers of QED for putting together such a memorable weekend!

17 Replies to “My first QED, and Naturopathic Diaries wins an Ockham Award”