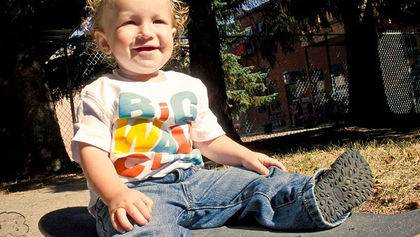 You are probably aware of Ezekiel Stephan, a 19 month old boy, who died in 2012, after his parents chose home remedies and naturopathy for the treatment of  bacterial meningitis. The parents currently are on trial in Canada for failing to provide the necessities of life.

Over the course of many days, Ezekiel’s condition rapidly deteriorated, but his parents chose to “give him as much natural product as possible,” including syrup, frozen berries and a mixture of apple cider vinegar, horse radish root, hot peppers, mashed onion, garlic and ginger root. By the time Ezekiel began slipping in and out of consciousness, a family friend, who is a registered nurse, examined the boy and instructed the parents to take him to the emergency room under the suspicion of meningitis.

Instead, the parents took Ezekiel to a licensed naturopath. His condition was dire. His mother recalled that his body was too stiff to be placed in a car seat, so Ezekiel was put on a mattress in the back of the car. The naturopath then gave a preparation of echinacea without performing a physical exam and did not instruct the parents to seek emergency medical attention. Ezekiel stopped breathing that evening.

Yesterday, we learned the identity of the naturopath who treated this child: Tracey (Pike) Tannis, a licensed ND in Alberta, Canada, and in “good standing.” She graduated from the Canadian College of Naturopathic Medicine in 2003, one of the seven “accredited” naturopathic schools in North America. Her practice interests include cancer, ozone therapy, chelation therapy, minor surgery, and pediatric care.

This story is absolutely heart-wrenching. The loss of a child is, understandably, devastating. And, I feel this sadness. My heart also partially feels for the naturopath who treated Ezekiel. She was faced with a scenario that overwhelmed her training. She had been tricked, like all NDs are, into thinking she was a competent primary care doctor who could use herbs to cure.

I have written about the poor training of licensed naturopaths previously for ScienceBasedMedicine.org, KevinMd.com, and here, at Naturopathic Diaries. In light of Ezekiel’s death complicated by a naturopath, I want to revisit a few points regarding naturopathic training.

Naturopathic students do not have the opportunity to practice on patients suffering from a wide range of illnesses. Instead, students often treat patients who are best described as the “worried well.” Naturopaths see patients who are typically healthy or who have minor health concerns. I never saw a child presenting with meningitis or even a patient with acute chest pain, shock, or lots of bleeding.

In order to meet graduation requirements, naturopathic students, at least at Bastyr University, are allowed to present vignettes of a medical case, and describe how to diagnose and treat these fictitious patients. This sort of training actually counts as “direct patient care” by the schools and by their accrediting agency. I presented cases for made-up patients suffering from HIV/AIDS, cancer, cardiovascular problems, and infectious diseases. I never had a chance to get any meaningful, first-hand training with patients actually suffering from these conditions. The ND treating Ezekiel probably didn’t either.

I can guess why this naturopath did not perform a physical exam before she made a diagnosis and dispensed a substance. Naturopaths are trained to work through imaginary cases rather than practice on real patients. I know why the naturopath recommended an herbal preparation even for something as serious as meningitis. Naturopaths, more frequently than not, attempt to treat viral infections and other aggressive diseases with herbs. I often used echinacea for ear infections and colds on my former patients of any age. My former boss was using all sorts of “natural” substances on patients with terminal cancer.

When the parents are naturalistic fanatics and against science-based medicine, it can be nearly impossible to demonstrate that their child needs urgent medical attention. It once took me hours to convince a mom to bring her lethargic, unresponsive child to the emergency room, whom I suspected had leukemia. I ended up being right.

I can sympathize with the force of the wake up call this Alberta naturopath must be experiencing. A child died, and she played a role. In part, this is a problem because the naturopathic establishment endorsed her as a competent doctor, and lawmakers bought the hype. As long as the naturopathic profession continues to assert that naturopaths are trained “just like medical doctors,” we are going to have issues.

I think the Alberta government, and every jurisdiction that licenses naturopaths, needs to take another look at who naturopaths really are. I recommend removing any kind of legal status as a “doctor” and requiring mandatory disclosure statements to patients about the sharp limits of naturopathic care. This will require some serious effort.

Immediately, however, licensed naturopaths should be restricted from seeing patients under the age of 18. I am happy to work with lawmakers and patient advocates to help enact these legislative changes. For some context, I completed one of the few “naturopathic residencies” in the United States, and I can honestly say that this training was inadequate to become a pediatrician. You’d be surprised to learn that there is a self-anointed naturopathic pediatrics board certification. Clearly, naturopaths do not have any humility.

There are many problems with the naturopathic profession. Let’s start by protecting the children.

Disclaimer: Please keep in mind this post is dated March 10, 2016. I am not updating the article continuously to reflect ongoing legal proceedings against Mr. and Mrs. Stephen. Any person that relies on any information obtained from this article does so at his or her own risk.

32 Replies to “A toddler dies from meningitis, governments need to block naturopathic pediatrics”