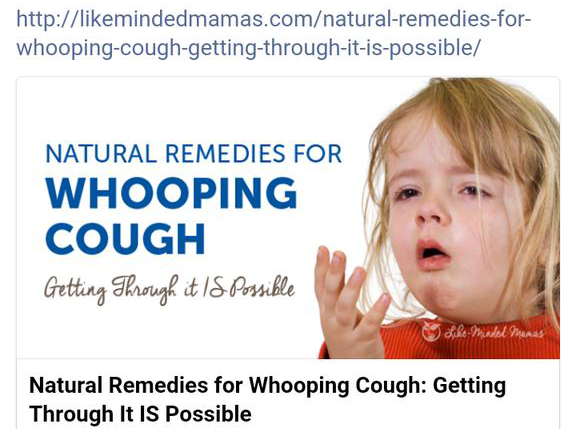 I was not planning on writing today. But then I read a blog post about naturopathic “cures” for Whooping cough, and I got mad. There must have been significant backlash, as the post has been taken down from www.LikeMindedMamas.com and the group’s Facebook page, Like-Minded Mamas. I took a screenshot of the post though, which you should read before continuing. It is shocking.

The post is written by Heather Dexter, a “mama of three” and a self-proclaimed “Certified Naturopathic Doctor” in Grand Rapids, Michigan. I assume she obtained her degree from a naturopathic diploma mill, as she does not name the school in her bio. Confusingly, she calls herself “a board-certified naturopathic doctor.” There is no such thing. My first of many problems with this post is her misrepresentation of her training by using the phrase “board-certified” and the word “doctor.” She is neither.

It hopefully goes without saying, but I am going to say it anyway. The advice in Heather’s post and much of what is on www.likemindedmamas.com should not be followed.

Heather tells the story of her three children contracting pertussis in October 2014 and how she allowed them to suffer one after another for months as she bounced around between various “healers,” experimenting with natural remedies.

Her oldest daughter was infected first, and then, like with any other highly infectious disease, her two younger children contracted the bacterial infection. Heather’s baby was only 9-months-old when the eldest daughter became sick. Heather describes this time in her family’s life this way:

It was perhaps what could be considered the most traumatic period of my life. Each child’s attitude and expression towards daily life was excessively dramatized as we endured a VERY lengthy immune building process.

Yes. She describes this terrible 5-month illness as a difficult time for her, and as a long “immune building process” for her three children whose lives were placed at risk and who needlessly suffered due to her incompetence and negligence.

As many know, pertussis is Whooping cough. It was named for the horrible characteristic whooping sound made when coughing. It is caused by the bacteria Bordatella pertussis, is spread through respiratory droplets (coughing, sneezing), is highly infectious, and sometimes deadly. Besides death, other known risks from pertussis include brain damage, pneumonia, encephalitis, and seizures.

People sick with pertussis suffer intensely. Even with appropriate medical treatment, the high-pitched whopping cough will linger, sometimes for as long as 10 weeks. The cough itself is so violent and terrbile that it is associated with its own set of risks, including loss of consciousness, broken ribs, hernias, subconjuntival hemorrhages, and vertebral artery dissection. Indeed, in her post, Heather describes several horrific coughing scenes.

At this point, M’s cough was beginning to scare me. She would wake in the middle of the night, multiple times a night, coughing so hard that she would puke over the side of her loft bed, followed by turning purple and then finally gasping for air.

During the night, L would cough until he barfed up mucus, proceeded by crying and screaming fits. He was genuinely terrified each and every time he woke from sleep without breath.

I have experienced this type of fear before with a different illness. I remember waking up in the middle of the night once when I had strep throat. I could not breathe. I gasped and gasped for air, but nothing. My throat was swollen shut. I ran desperately into my parents bedroom and grabbed and shook my mom. Finally, my throat relaxed, and I could breath again. I sobbed. The adrenaline, fear, and the sheer pain of trying to breathe was one of the scariest experiences of my life. I, too, remember being genuinely afraid to go back to sleep, and I was 20 years old.

My heart absolutely aches for this little boy. And I cannot feel anything but absolute disgust towards his mom for unnecessarily letting him suffer.

In a medical setting, pertussis is treated with antibiotics. However, Heather is not a doctor with medical training. So she tried to use ineffective folk remedies, such as good ol’ homeopathy and herbs as treatment. As things continued to get worse, as they always do in these types of situations, she decided to seek advice from her naturopathic doctor.

Despite naturopaths persistently insisting they are trained as primary care doctors, this ND doled out more nonsensical and dangerous advice. For example, the ND suggested more supplements, more herbs, some of which are potentially toxic (Lobelia), and enemas, because, as Heather writes,

Turns out the best way to clear out the lungs is through the rectum…enemas.

After about 150 days of suffering and hundreds of dollars spent on “consultations” and natural remedies, her children get better. Heather describes the period as a “living hell,” affecting her relationship with her husband and questioning “everything I knew about natural health,” which is not much, apparently.

Sadly, she tells the story like she has triumphed. She says, “We did it.” without needing medical care. Referring to herself, she writes

It has been my biggest challenge to date as a mother. This mother conquered.

And for what reason, one may ask, was it necessary to not seek medical treatment and to allow pertussis to run its course, wreaking havoc all over these children’s lives? Heather has an answer.

My children developed REAL and TRUE immunity from being exposed to this bacteria and fighting it off naturally.

Obviously, Heather does not understand that immunity acquired through a vaccine is both real and true immunity. And, it is much, much safer than the illness her children contracted.

I can only assume that Heather does not vaccinate her children. Her stubbornness to refuse medical treatment for her children seemed to have no other purpose than a self-serving one.

This is not a story of a mom triumphing over pertussis by using only natural medicine and faith. In my opinion, this is a story of child abuse. I hope when her children are old enough they learn how their mother risked their lives with the delusion that “nature is best.”

Edit: Thank you, Dr. Nathan Boonstra for pointing out that pertussis survivors can have permanent lung damage.

@NaturoDiaries Worth pointing out pertussis survivors can have permanent lung damage, long term pulm issues. This family did not triumph.

Edit: In the interest of wider publicity, I want to point out critical coverage of Heather Dexter’s story written by others: 1) Epi Ren of Epidemiological.net; 2) Dr. Amy Tuteur of SkepticalOB.com; 3) Orac of ScienceBlogs.com/RespectfulInsolence.